I've been pretty busy this past month painting. And it seems as though all my photos from the past while have been taken from the windows of my house as such. I wanted to start working with oil, and i thought a good way to learn would be to copy master painter - Giorgio Morandi. He really did a lot with a little... and a lot of the character of each painting is really defined by his seeming sloppiness and rampant flaw. Crooked wavy lines. Awkward shape and obsessive compartmentalized composition. Occasional blobs and blurs. All very calculated I'm sure. But such a hard thing to replicate and make look natural as its akin to copying someones signature.

....And oddly enough with this project, I've chosen to leave out Morandi's signature. The typical Morandi painting, as most who are familiar with the artist, know that he scrawls his name with a casual confidence. Large and lumpy, front and center... And I suppose it just feels wrong copying another persons signature... this project is not about forgery after all. It's about learning how to paint.. and the further I am into these, it has become more about the appropriation of the original work with all of the filters used to create the final image, a'la Sherrie Levine. Thinking of it this way: The objects on the table. Morandi's vision in creating the original. The photograph. The book print. The scanning of the book print. The upload to the internet. My downloading off the internet. Printing it out. Drawing the objects on the canvas. Painting it. And even my photograph of the painting, uploading it, to your seeing it... makes it 12 times removed from the bottles sitting on the table. And I love the thought of someone copying these paintings. If anyone feels so inclined... please do. I'd love to see a game of telephone with these paintings...

Often times I'm unable to find the actual dimensions of the original works... so I have to guess. I like making them smaller than the originals anyways... some of his works are just too big (for my taste... 20"+) and uses up too much material. Going into this project I learned some of the legalities involved of copying art works, and a big part involves painting a different size than the original. When artists enter the MET or other museums to sit in front of a masterwork and copy, one of the stipulations is that the canvas be smaller than the original. Another legality is signing "after (the artist)"... So this project has been called "after Morandi."

This has been a fun project, I've learned how to paint and I've got a pile of these stacked in my closet now. No clue what to do with them! I think I've been bit by what ever compelled Morandi to delve into the same objects over and over and over again. I feel the same compulsion in painting his paintings. The same draw to the mystery of repetition... seeing something new in something familiar. 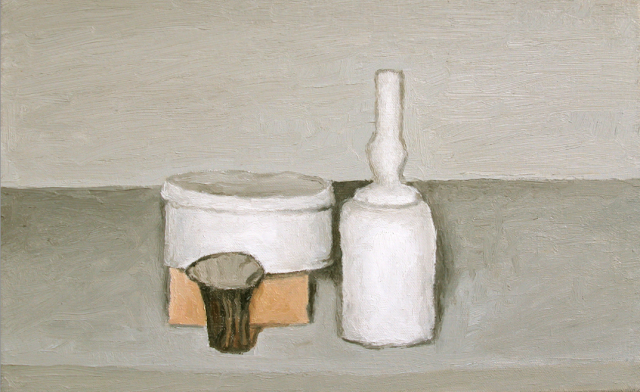 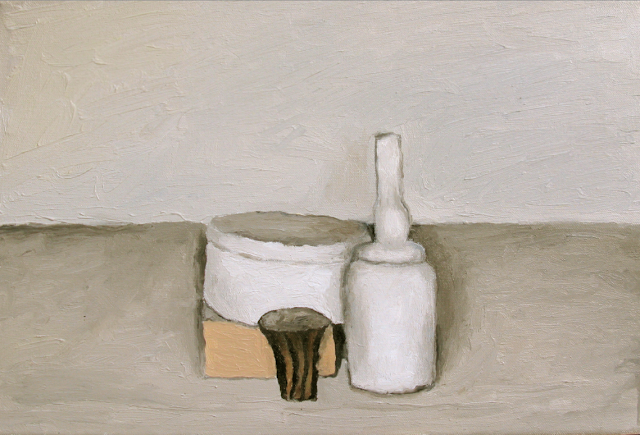 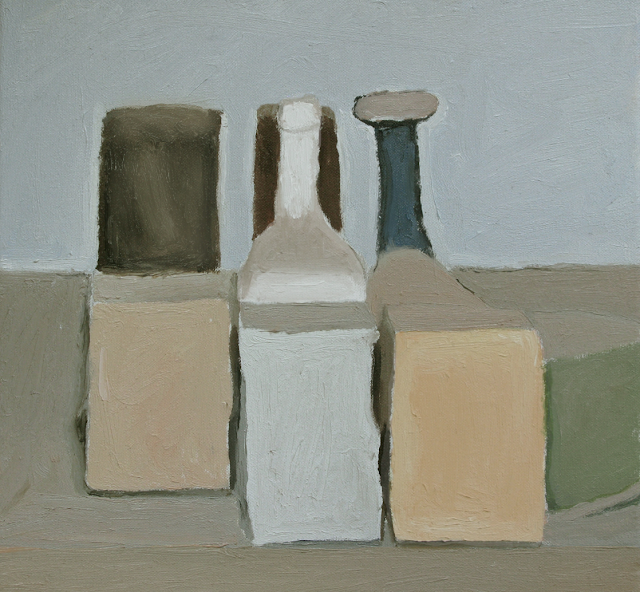 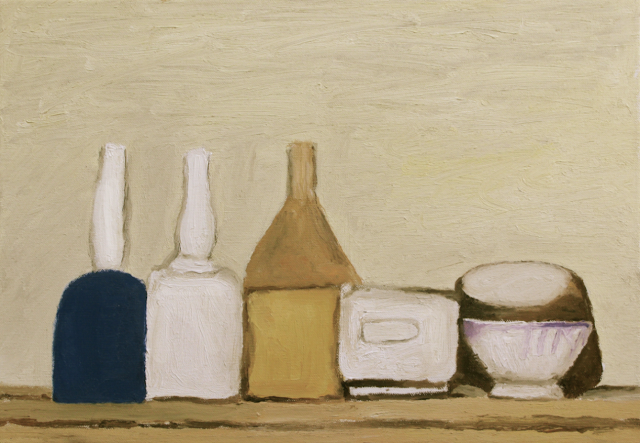 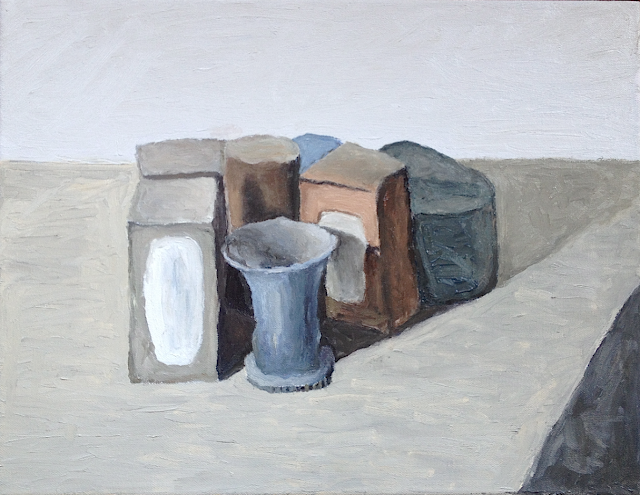 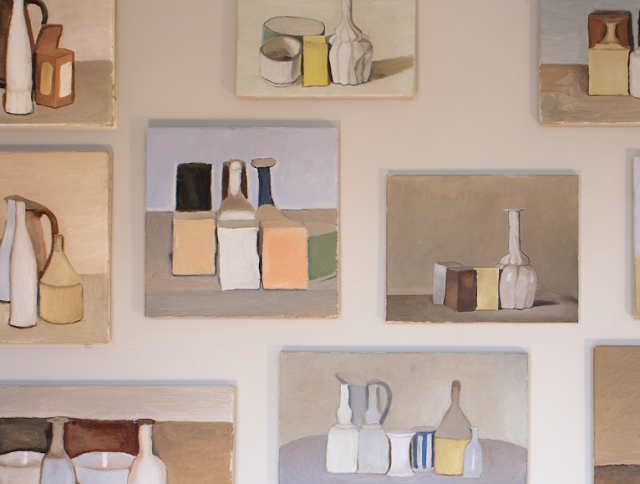 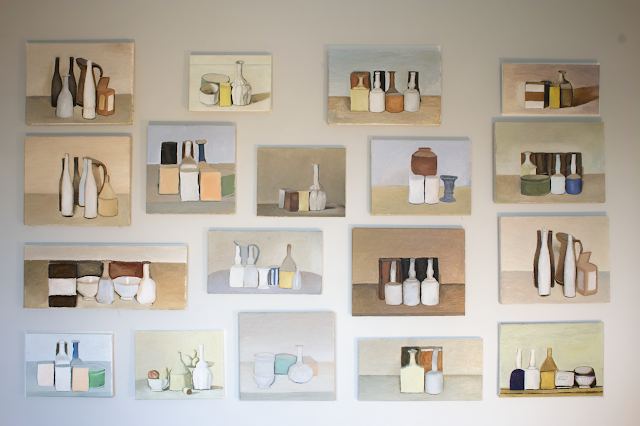 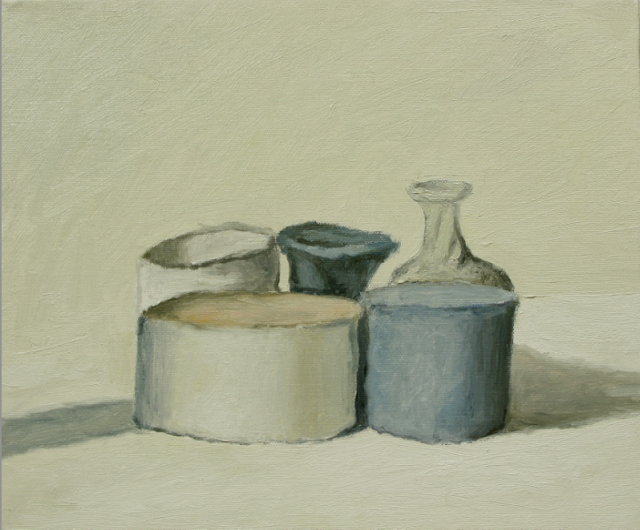 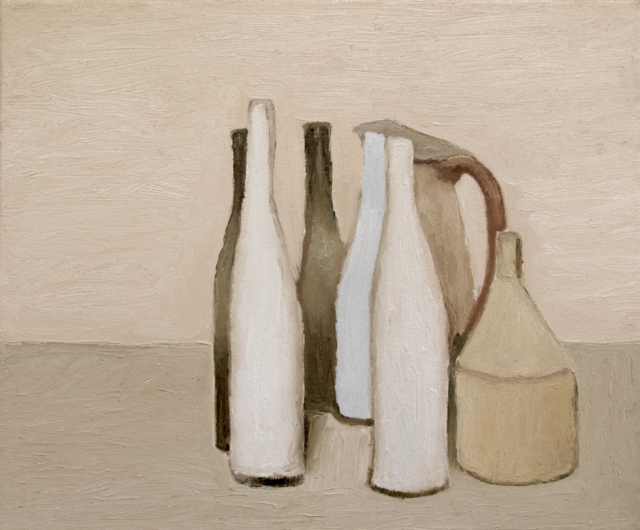